The Romanian Docs in Progress program gave documentary filmmakers, currently developing stories originating in this part of Europe, the opportunity to present their ongoing work to an audience of both local and international film professionals, with the aim to attract possibilities of finance, co-production and distribution. Aiming to support new voices and bridge the gap between new talent and decision makers, Romanian Docs in Progress offered documentary projects the opportunity to gain the support meant to help finalize their projects.

All twelve projects, selected as part of the Romanian Docs in Progress program, had a chance to meet with and build relationships with documentary experts (producers, distributors, festival representatives) during individual meetings on Thursday 18 October 2018. The experts, which came from Ireland, UK, France, Spain, Belgium, Germany, Poland, Hungary, Czech Republic, Romania, Greece, Italy, Serbia, etc, could chose from the 12 projects the ones that they were interested in meeting with for short (15 minute) discussions.

Friday, 19 October 2018, four of the twelve projects selected in the Romanian Docs in Progress section were presented in front of an international documentary industry audience. Each presentations was followed by a short Q&A session with the project representatives. 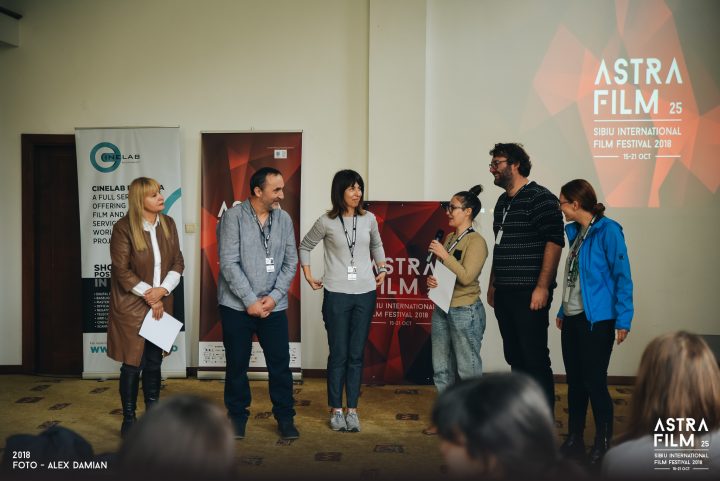 Friday, 19 October 2018, Astra Film Festival – through its industry program DocumentaryTank@AFF – has awarded two documentary projects, among the twelve projects selected in the Romanian Docs in Progress program. The jury, which consisted of producers Alina David (HBO) and Sorin Manu (Evolution Art & Film GbR) and filmmaker Vlad Petri decided to award the two prizes to the projects The Illiberal Society and all Its Enemies(dir. Ruxandra Gubernat) and Acasă/ Home (dir. Radu Ciorniciuc).

The project The Illiberal Society and all its Enemies (Director – Ruxandra Gubernat, Producer – Ioana Țurcan, Company – Studioset Production, Screenwriter – Irina Dobriță, Research – Henry Rammelt) received the Romanian Docs in Progress Award – offered by HBO. This “coming of political age” documentary follows the insecure footsteps of three adolescents from today’s Hungary, Poland and Romania. Protagonists in their own movie, these teenagers face the prospects of leaving their country or hitting the walls of a restricting society.

Motivation of the jury

For an interesting story, which is connected with the reality it portrays, made by a young director with a strong voice, the jury has decided to give the Romanian Docs in Progress Award, offered by HBO, to a project which has demonstrated through a well presented and convincing pitch its international potential.

The Romanian Docs in Progress Postproduction Award – offered by Cinelab Romania, consisting of digital postproduction services, was awarded to the Romanian-Norwegian coproduction project Acasă / Home (Director – Radu Ciorniciuc, Producers – Monica Lăzurean-Gorgan and John Berger, Companies – Manifest Film and Polarfox). The film follows the Enache family, who have lived for 20 years in the wilderness of the Bucharest’s Delta, that is until they are chased out of their paradise and forced to adapt in the big city.

Motivation of the jury

For a story that has been developed over several years, which follows the integration and reintegration of a family into the jungle that is society and for a precise narrative structure that drives the film, the jury has decided to give the Romanian Docs in Progress Postproduction Award to the project Acasă/ Home, a project which is 90% completed and which we believe will benefit from this award allowing it to be completed as soon as possible.

Read more
0EN
We use cookies to ensure that we give you the best experience on our website. If you continue to use this site we will assume that you are happy with it.Ok